REGGIES IN-STORE SHOW SERIES – 14 NOVEMBER Record Breakers hosted its second show in a series on 14 November with a dose of thrash metal. First on the bill were “Richardson” Richardson, a duo of two bassists with a drum machine. They hammered through their first set with a mix of “punk for metalheads and metal for poseurs.” After a fifteen minute tear down and set up intermission, Reggies Intern, Julian’s band took the small swath of rug behind the counter we call “the stage” at Breakers. Texas Toast Chainsaw Massacre was a mix of two thrash guitarists with a hardcore singer and drummer. Julian, playing bass, acted as the hype-man of the show – split second pauses before jumping into a bass solo or picking up the rhythm with the drums. Mostly Texas Toast were fun, short one-minute bursts of energy that covered subjects such as all the ways that “Michael Bay Ruined My Childhood” and “Post Vegetarian Grindcore.” Thanks to Azalee who booked the bands, promoted the show and, with Julian, ran production for the show and to the kitchen for providing free hotdogs and soda. If you missed the show, don’t worry we’ll be offering free food at our next in-store shows: we have a multi-band roster on Black Friday (seriously come visit and buy some vinyl or CD’s!) and another show with New Oceans and Lever on 12 December. – Jenn Endless 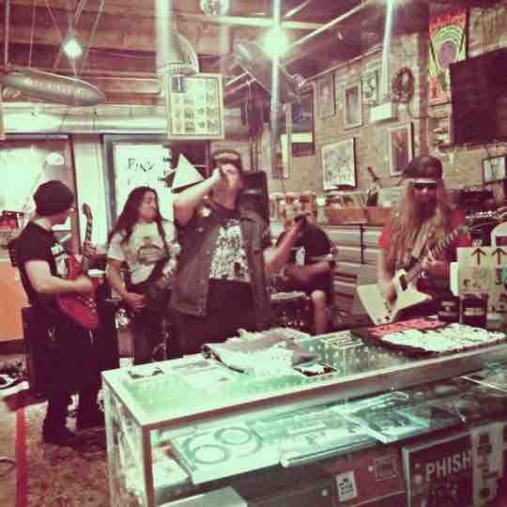