Experience the magic of Pat Travers and his band
(Tommy Craig on drums; Dave Pastorius on bass)
playing all their best loved hits and a bunch of cool musical surprises!

THIS WILL BE AN INTERACTIVE EXPERIENCE!
Your song requests and messages will be relayed to the band during the show 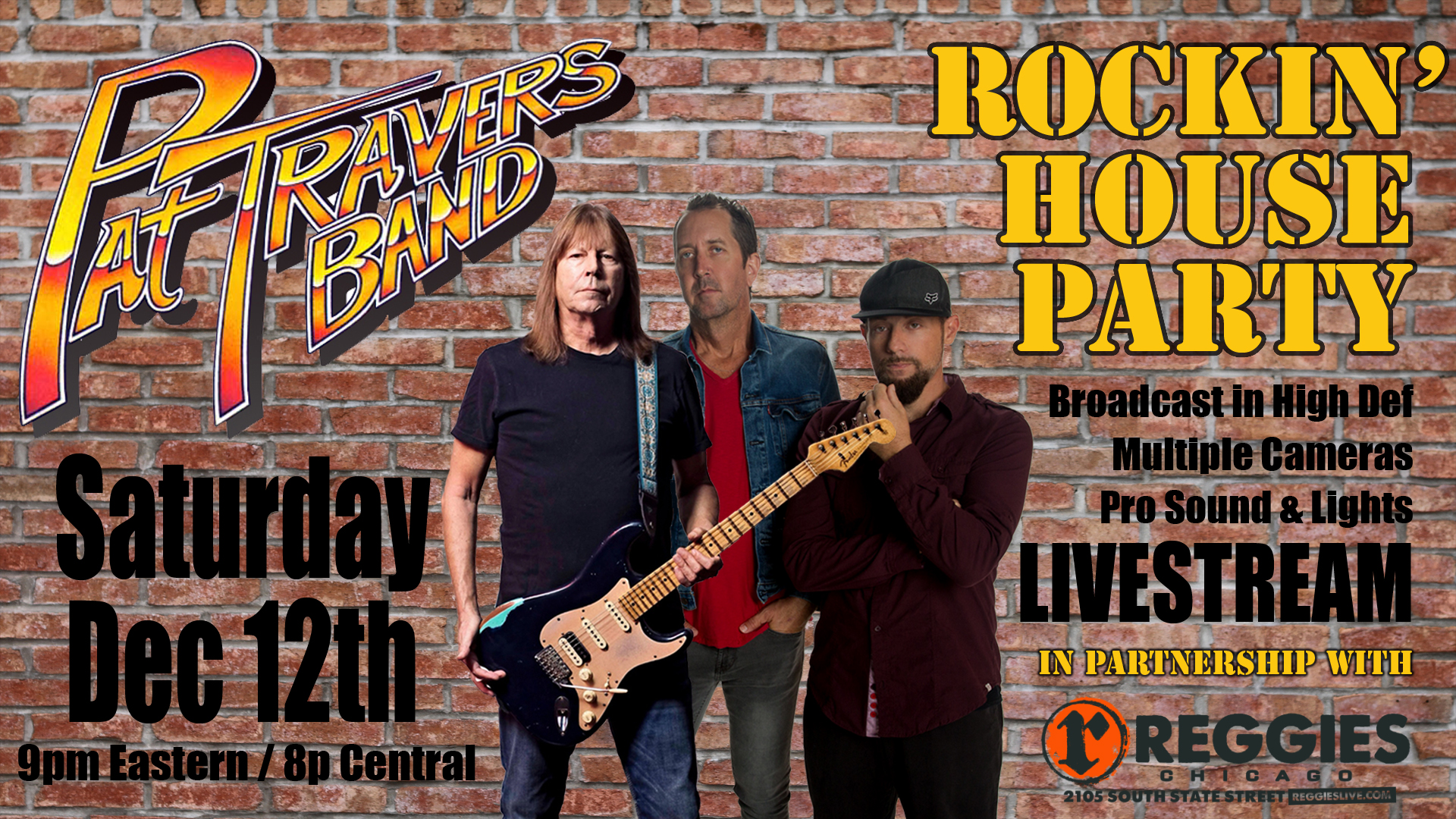 Pat Travers was born in Toronto, Canada on April 12, 1954. Soon after picking up the guitar at age 12 Pat saw the legend Jimi Hendrix perform in Ottawa. This obvious inspirational concert must have sparked the young Pat to go after the dream of becoming a star like so many of his early influences. Inspired by such guitarists as Hendrix, Jeff Beck, Eric Clapton and Jimmy Page, Pat began playing in bands early in his teens. His first bands were “Red Hot” and “Merge” who played in Quebec area clubs. While the early years were hard, they would eventually pay off in the form of improved musicianship, style, and exposure.

While performing with Merge, he was noticed by the 50’s rock artist Ronnie Hawkins who soon had Pat off on the road performing with him. While Hawkins music was mostly old rock and roll, country and rockabilly, Pat used this experience to hone his skills and voice as Hawkins lead guitarist. After a year on the road with Hawkins, Pat traded in the tuxedoes and ties to go after his true dream, to have his own band and become a star.

At age 20, Pat with the help of some friends he moved to London in hopes of achieving his dreams. Armed with a Marshall amp, a wah-wha pedal, and a few hours of studio time Pat recorded a demo that soon earned him a recording contract with Polydor. Releasing his debut album “Pat Travers” in April 1976 with Mars Cowling on bass, and Roy Dyke on drums, Pat embarked on a tour of England in support of his debut. Adorned in a red and white jumpsuit displaying the maple leaf of his native Canada, Pat increased his following of fans. Trademarks of his early shows included giving away cardboard replicas of his black Fender Telecaster, playing barefoot, and inviting audience member to play “air guitar” on stage during the show. It was with this accessibility to the fans that Pat became an invited performer to the huge Reading Festival in 1976.

Pat released Makin’ Magic in 1977 and continued to tour again infront of huge crowds. It was after the release of his album “Putting It Straight” that Pat returned to the North America as the trend in the UK was leaning towards the punk rock revolution instead of the hard blues driven rock that Pat was producing.

Enlisting the talents of Tommy Aldridge and Pat Thrall and of course always inspirational Mars Cowling the release of “Heat In the Street” further strengthen his following. The album featured more of Pat’s sometimes elaborate songs which further proved that he wasn’t just a mere air headed guitar hero, but that of an accomplished composer and lyricist. Pat Thrall, a great guitarist as well, quickly rounded out the sound and provided Pat more freedom to do other things like expand his keyboard playing. Besides, Pat Thrall’s influence from his fusion background provided more fuel for Pat to write from. But Pat realized the best way to hear the Pat Travers Band was to hear it live. So, understanding this the band released its first live album “Go For What You Know” in 1979.

Considered one of his best albums and a “must have” for any guitar fan, “Go For What You Know” introduced many more fans to the music of Pat Travers. Some say that it was with this release that PT garnered his largest increase of fans. Since the album received large amounts of radio airplay and with successful tours with some of the biggest bands, Pat soon found himself at the center of attention amongst aspiring guitarists. The album was one of his best seller and still sells well even many years later.

More and more Pat was being considered a guitar hero, a description he himself was less comfortable with. Expressing himself more musically and with tonality Pat prided himself in these areas more than in speed and trickery. While Pat could certainly keep up with the “fastest” guitarists of the era, his first priority was more in the music than showing off what he could do on the guitar. With this rising respect, Pat found himself on the cover of Guitar Player magazine as the feature artist in January 1980.

In 1980 his release of “Crash And Burn” proved to be an expansion of his already excellent composing skills. The songs were more intricate and used a more diverse method of song delivery. Keyboards and vocals are the true highlight of this album as Pat flexed his musicianship muscles. And while not to disappoint his fans, he still plays awesome guitars on such burners as “Snortin’ Whiskey”.

Shortly after the there performance in 1980 at the Reading Festival Pat Thrall and Tommy Aldridge left the band. Not one to sit on his laurels, Pat was back in the studio to record “Radio Active” in 1981. This album marked a slight return to his roots by using the classic power trio format that made him a rising star in the UK. Following the album he embarked on a very successful tour co-headlining with Rainbow.

1982 saw the release of Black Pearl, and in 1984 the release of Hot Shot, and a video related release “Just Another Killer Day”. Several of Pat’s videos were even displayed on MTV.

Mired with problems with management, and with legal problems with Polydor, Pat soon stepped out of the recording industry but continued to tour and kept his contact with the thousands and thousands of fans he had from all the previous years. Once stated as “One forgotten by the industry, but never forgotten by the fans”, Pat still retained his fan base and still thrilled anyone who would come to see him perform.

In 1990 Pat re-entered the recording studio with Mars, Jerry Riggs and Scott Zymowski and released “School of Hard Knocks”, of course a title that could be considered a self appointed reflection on his career. The release not only strengthened his fans who were so glad to hear new PT, but also attracted more new fans.

After a successful tour in support of “School of Hard Knocks” in the UK, Pat once again toured the US and Canada where a concert in the town of his birthplace was recorded in 1990 and released as “Boom Boom, Live at the Diamond Club”. This album proved once again that PT is one to be reckoned with live, favoring the live environment instead of the trickery of the studio. It has been said that “live is where you separate the men from the boys”, and this release proves it. A video of the same show was also released and is well worth getting for any fan.

Since PT fans demanded more, and after thousands of requests on the BBC to replay Pat’s performances from the 1977 and 1980 Reading Festivals the BBC released “Pat Travers – BBC Live in Concert”. As one of the most requested archives in the BBC library it was released on Windsong in 1992 and is of course another of the “must haves” for any true fan.

This new found interest in his music prompted former record company nemesis Polydor to release “The Best of Pat Travers” in 1990, which also was the first release of his material on CD. In addition, Anthology Volume One and Two, a two CD set was also release in the UK and features even more of his material in the CD format. Soon other PT Classics, “Go For What You Know”, “Crash and Burn” were also released in the US on CD. Imports were released in Japan of “Heat in the Street”, and “Putting it Straight” was released in the UK.

Having been without a US based recording label for many years Pat soon signed with Mike Varney’s Blues Bureau International label in the US. The release of “Blues Tracks” in 1993 further expanded Pat’s library of sound. The songs are from the “greats” of the blues, many of who were influences of Pat’s, but Pat’ puts his flare and flavor to these great songs. Following Blues Tracks Pat issued Just a Touch, Blues Magnet, Halfway To Somewhere, Lookin’ Up, Best Of Blues + Live, Blues Tracks 2 and his latest release “Don’t Feed The Alligators” issued in 2000.

Pat’s Blues Bureau years are perhaps his most significant in that he has worked with many musicians and the songs feature more of the classic blues based guitar that fans crave. Some what of a return to the sounds and style that made us pure Travers fans in the first place.

While touring and supporting the latest releases Pat has been impressing old fans as well as new ones all over the US and Europe. Recent tours have featured such well known guitarists as Jeff Watson of Night Ranger, Rick Derringer, and Tim Keiffer of Cinderella. Touring musicians during the early Blues Bureau years included Sean “Cannon” Shannon, bassist Dave La Rue and bassist Kevin Rian. Pat punched out the tunes before adoring fans, in small clubs and stadiums with the same intensity he always had. Irregardless of the crowd size, Pat puts out the same effort night after grueling night.

In retrospect, Pat is gaining a resurgence in his career. After overcoming many problems that would have made most to give it up, Pat still pushes on. Which is much to the appreciation of the fans who continue to follow. Not only does Pat find himself once again climbing towards the top, he can also enjoy it with those that are close to him, his famaily. Pat’s wife Monica sings backup on many of Pat’s songs both in studio and live. His children Amanda and Elijah have inspired songs and certainly help to excite and inspire Pat to keep doing what he does best, and that is of course making some of the best music possible.

The Pat Travers Band continues to tour around the world, “Makin’ Magic” for their die hard fans. While Pat’s had some great musicians working with him on past tours he is currently working, recording and touring with Eric “Freight-train” Frates (drums) and Rick Navarro (bass). Rick and Eric are long time friends, and it shows in what they bring to the stage night after night. They provide a nice, tight rockin’ platform for PT to lay down his signature licks against.

Much to the pleasure of his fans in 2001 – Pat has made available a LIVE recording of a very rare solo appearance, “Pat Travers Solo”. This CD includes the first time ever that Pat has done an acoustic set. It was recorded live at Nils Lofgren’s Guitar Bar in Henderson, Nevada.

2001 also saw Pat Travers join the “Voices of Classic Rock” tour, featuring a wide arrangement of musicians from the major bands of the ‘70’s and ‘80’s. Among them are the likes of bassist Glenn Hughes and vocalist Joe Lynn Turner of Deep Purple, John Cafferty, Spencer Davis, and Gary U.S. Bond, to name but a few. This tour features each artist doing two or three of their signature tunes. On this tour, PT is playing “Boom Boom”, “Snorting Whiskey”, and “HotShot”, as well as doing much of the lead guitar work on the other songs..