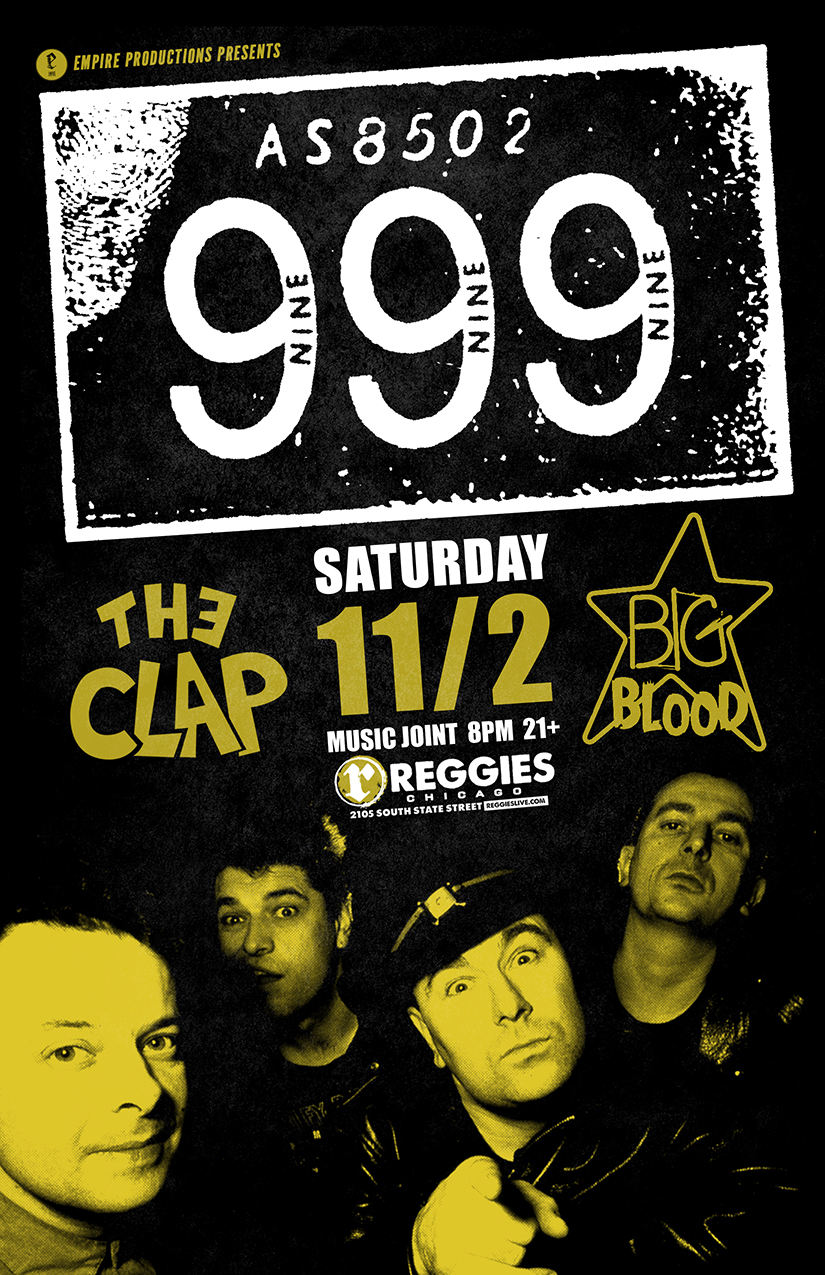 999 celebrated their first 40 years anniversary on 5th December 2016. The reason for their longevity is not airplay, massive publicity, hype or even a major recording deal but word of mouth and that “word of mouth” now extends to nearly every country on earth.

999 were first conceived in late 1976 when Nick Cash (vocals/guitar) and Guy Days (vocals/lead guitar), who were at school together, decided to form a group. Within a couple of months they had teamed up with Jon Watson (bass) and Pablo Labritain (drums) and 999 were officially born. Their first gig was at the Northampton Cricket Club in January 1977. Interest in the band was immediate and constant gigging around London brought with it critical acclaim and a hard core following of supporters from Southall, calling themselves “The Crew”. These ranks were soon swollen by the Manchester, Birmingham, Edinburgh, Munich, Vienna, Zagreb, Stockholm, Oslo, Berlin, New York, LA., Toronto, Philadelphia, and San Francisco “Crews” each proving as dedicated as the last.

The frenzy and raw energy of the early days were captured by their debut single “I’m Alive on the bands own Labritain label and sold well enough to become a minor hit. Next through their association with United Artists records the second and third singles, “Nasty Nasty” and the now classic “Emergency” were released both scaling the lower reaches of the charts and confirming 999 to be one of the major forces in the British New Wave Movement.

The first album titled simply “999” was released and was greeted with impressive sales and critical acclaim. Extensive touring took them throughout Britain and Europe where they now encountered full houses.

The second album “Separates” was released and immediately the single “Homicide” leapt straight into the UK top forty without any Radio airplay and was banned by the BBC and most radio stations.

Early 1979 saw the band embarking on their first U.S. tour, which was an achievement in itself, as they were still without a record deal in America at the time. Response to the band was ecstatic, all the venues being filled and import albums being sold out in a rush of enthusiasm. The band were immediately booked for a return trip.

THE CLAP – Formed in 1978 in Catasauqua ,PA. Cool raw punk, powerful & snotty, and still melodic. Great if you’re into Killed by Death type stuff. Had a rare single in 1982.